There is a lot of powerful emotions when it comes to the Confederate Flag. Those feelings varies from furious outrage to complete endearment. Should you ask individuals for their reason for their particular emotional response it would vary as well? To be honest I am completely confused by this reaction and after recent events (I am speaking of that horrific shooting that occurred in South Carolina and the church burnings that followed). The only thing that this flag reminds me of is a car ironically called “General Lee” from the 80’s show “The Duke of Hazard”. The joys of my youth! With so many emotions surrounding this particular item, I felt obligated to check out its history and take a look on how a flag with no association to no particular organization or country can be such an influential force in today’s society. What better way to understand the situation.

Imagine my amazement when I discovered that there have been three official versions of the Confederate Flag. Get this and that version that everyone knows about is not one of them. I’ll explain the history behind that one later. Let’s start with the evolution of this flag.

There were two versions of the “The Stars and Bars” (see above), which was used from 1861 – 1863. The difference between the flags are the amount of stars on the actual flag. The stars increased as more states joined the Confederacy. This flag was designed by Nicola Marshall.

This version of the Confederate flag is often mistaken by many with the popular version seen from day to day. This is version is called “The Stainless Banner”, which was used from 1863 – 1865. The version was designed by William T. Thompson. Note that this flag holds the image of ‘The Battle Flag’ but is not the actual flag.

The final version officially used by the Confederate States was called “The Blood-Stained Banner”. This flag was used in 1865 and was designed by Arthur L. Rogers.

After doing some research on this flag I was surprised to see that the “Battle Flag” (which is the version of the flag that we are more familiar with these days.), was never actually the official flag of the Confederate states. Instead the flag was adopted by the Army of Northern Virginia commanded by General Robert E. Lee. Just a note, it wasn’t until I got into my mid-twenties that I realized who that the car I mentioned earlier was a tribute to; the actual General Lee that I learned about in school. The reason I bring this up is because that show helped show what many have been calling “Southern Pride” when it comes to that flag, the civil war and basically what they consider their tradition. The flag above was never officially adopted by the Confederacy and basically became its unofficial flag.  This flag is also known as The Rebel Flag, Dixie Flag and the Southern Cross. I have to say that you can’t talk about this flag without talking about the Civil War itself but I am going to leave that for another post.

There are five states that actually have laws that protect the flag with the same application as the actual National flag; Florida, Georgia, Louisiana, Mississippi and up until recently South Carolina. This is all despite the fact that the Supreme Court the ruled for banning the discretion of any flag unconstitutional and are not enforceable (Texas vs Johnson). You can also find variations of the Confederate Flag within two state flags. The State flag of Mississippi: 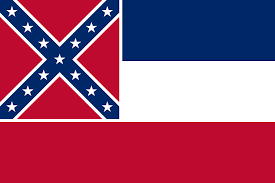 As well as the State of Georgia:

If you don’t see the resemblance take a closer look of the official flags of the Confederacy. Despite the adoption of the flags by these states, the state of California passed legislation in 2014 prohibiting the selling or display of the flag by any government agency, only for historical and educational purposes. Despite how the rest of the world feel about the flag, most southern feel that this flag is a symbol of their heritage, their resilience and their proud history.

While the battle flag has been adopted by several white separatist groups not only within the United States but throughout the world. Which to those that hold it dear with pride find it as an insult – Maybe! We tend to forget that these flags were created during a time of war. The civil war was anything but. It was a war that had several reasons backing it not just one.

And so much more that I will cover in another post. All and all I really don’t know what my final opinion on this flag could be. Yes they call this flag the rebel flag and some would be confused by the pride they hear behind it. I understand it, you have to keep in mind that the flag we place our hearts over and say “ I pledge …. “ was once considered the rebel flag to the British. For those that cringe at the sight of it because it is a representation of civil oppression and hate. Well I could see this too. The civil war was an economical war and the truth of the matter is that slavery was basically currency. You don’t mess with a man’s money – no I don’t agree with slavery as a concept, yet this is the truth of the matter. As slavery was abolish then the hate groups developed. So I can understand why most are terrified at the sight of the flag.

Really picture this! Your home with the family after a hard day’s labor for pennies on the dollar, when a cross is lite up on your lawn with people in white sheets standing in front of it carry that flag. Yeah! I could see why they would have a strong opposition to this flag. (The symbolism could get worst but I figured you would get the gest.) Like I mentioned earlier the battle flag was carried in battle, during battle. Yes there is always a rebellion going on but don’t you think it’s time to leave this flag with a war that has ended long ago. Pick up a needle and thread to come up with a symbol that deals with the here and now. Leaving the past where it is. Live in the present. Work on the future.  I say this because we hold on mostly to the negative and forgot that at one point this flag did mean hope and pride (not white pride but southern pride. Yes there is a difference). To both blacks and whites but those are still issues of the past.

I think California has the right idea. On your property you can do what you want but the government agencies should be on the same page. The civil war ended over a century ago. Keep the pride but let’s keep moving.

I forgot to add one more flag, which I was reminded of (Thank you Galaxy Jane). I actually like this design. Ladies and Gentlemen. the Bonnie Blue.

Here are some links for you to check out:

5 thoughts on “What’s the deal with the Confederate Flag?”